Continuing to post selections taken out of context from large amounts of unfinished material collected for The Constellation of Man, a work of literature planned for three volumes. All selections were written by me since 2010. Some are unrepresentative. All remain in development, subject to change. —CPB

Proteus, the deposed god of the sea, could still see through its murky depths, and consorted pleasantly with sea-creatures, behemoths and monsters. Tales of Proteus relate his daily custom to cautiously wade from the water and sleep on the shore surrounded by briny seals, like a shepherd with his flock.

Those who found Proteus dreaming there, at the threshold of his domain, could try to seize him. One resourceful enough to catch the wise old man of the depths might obtain peerless counsel. Proteus could see the past and the future. 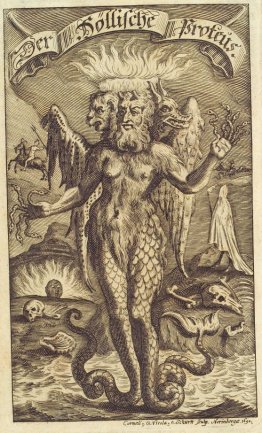 The appearance of dread Proteus (lit. The Infernal Proteus) depicted in 1690.

But cunning Proteus was not easily caught. He came and went in secrecy, requiring considerable guile to approach. Once grasped, holding him was even more difficult. To avoid being pinned down and divulging his mysteries, Proteus would writhe, wriggle, and suddenly change into shapes as fearsome as a serpent or wild boar, as unexpected as a leafy tree, or flame, or a torrent of water. A hero would have to dismiss these distractions. Only to him would Proteus impart hard-won truths.

So it is with introspection looking into the unconscious. The other world seems alien, capricious as the tides, then vertiginous, bottomless to the lone diver immersed and falling. Probing the depths meets strange and powerful resistance. One might have to strive despite misdirection, like Proteus’ phantasmagoria, some threatening.

This wavy sea comes replete with forms, shapes, illusions, and appearances, and below, resources, profundity, beauty, and fear. It is alive with creatures of the imagination, and as many reflections of the one who looks. 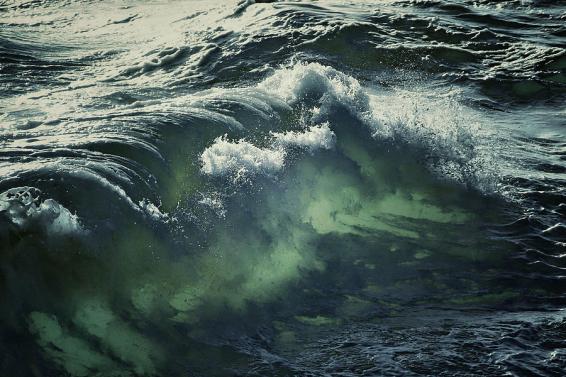 As slippery as dreams, Proteus changes shape to avoid telling what he knows—to those who aren’t both wise to fluidity, and steadfast. But he knows the depths of us, the unvisitable deep. Literal and straightforward minds that behave as solid ground expects are never so oracular. Obtaining answers requires an indirect approach, and the wit to know that answers take on many guises. [Compare the figurative language of esoteric symbols invented to capture spiritual experiences. Like dream meanings inferred post hoc—sparer than all the feelings and intricacies of a dream—symbols deployed after the event grasp at more significance than words can hold, a nonverbal reality on its own terms.] 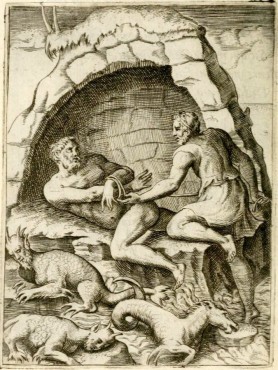 Menelaus binding Proteus, as depicted in 1574.

Wily Proteus resists, yet he is not unwilling. Proteus is there, waiting to be caught, ready to yield his knowledge to the one who needs it and prepares himself for it. The trial of Proteus tests understanding and courage. The hero who passes the test accepts the undersea with its difficult wisdom as his own domain for as long as the revelation lasts, much as meditative introspection can recognize the unconscious and embrace it, learning much. To the contrary way of thinking and fighting against oneself, that domain remains quite apart, antagonistic and alien. Homer tells us that when Menelaus is stranded for some time on his voyage home from the siege of Troy by ill winds, he is only able to sail on the sea once he takes stock of his situation by Proteus’ means, reconciles himself, and thus propitiates his gods.

Knowledge comes out of a great unseen unknown. At least that is how the upwelling appears to one who has become an outsider to the fabulous realms of suggestion. The hero is making a petition to render the uncontainable truth. And first, that one must embrace the mutable monstrum that bubbles up from an unfamiliar well. [The monstrum being both “monster” and “portent.”]

The paradox of the self asking knowledge of the deeper, unknown self is this: We must already have the hidden knowledge somewhere—for we are asking ourselves—and yet we do not possess it. That is, we have not yet managed to acknowledge or reconcile the precursor of knowing. Operating under conscious guises and limitations, we do not have easy access to the unformulated.

The case of petitioning the liquid unknown for concrete knowledge amounts to steeling oneself to recognize what one does already know, after some obtuse and unrealized fashion: what must be done, or, what one hardly wants to realize.

Homer has Menelaus master Proteus—with some difficulty, and divine help, typical trope of such stories—to tell him not only what he must do to finally return home, but also what he does not want to admit. He learns what has befallen his friends, comrades and family after the long voyage home from the siege of Troy: death, murder, betrayal, stranding, loss.

Tales of Proteus have him tell heroes how they can repair the harm caused by alienating a god or demigod by past sin they had never reconciled.

Virgil says that Aristaeus, the pastoral god who devised beekeeping, sought a remedy for the mysterious demise of his bees. His mother the nymph Cyrene coaches him to surprise, grab and bind Proteus fast through his vicious changes—boar, tiger, serpent, lioness, flame, river. This Aristaeus does.

Proteus discloses that Aristaeus’ crime of pursuing the wife of Orpheus to her accidental death has had vengeance haunting him.

The ritual sacrifice Aristaeus then makes brings forth live bees, boiling from the stomachs of the oxen burning on the altars. Thus Virgil explains the provenance of the apicultural ritual of bougonia, the bovine sacrifice rumored to regenerate the hives with new bees, usually slaughter followed by burial, or covering with dung. One version specified formulaic steps for beating an ox to death, sealing it shut precisely, and walling it in for weeks.

Binding the terrifying faces of Proteus obtains more than the secrets of a seer. These are more than secrets. They are sorrows, shames and sins.

The seeker binds his doubts, aversions, and fears. He does not force the whole unconscious to his service, or tame the primal. This would misread the significance of this flavor and style, along literal lines preferred by rationalized symbolism. On the contrary, he forces his inner resistances but supplicates his inner pantheon, and old man Proteus embodies both.

With these strange littoral petitions, we enter into a domain of potency, ferocity, intensity, even savagery, at least in metaphors—enlisting the primal forces of the psyche and the vital forces of the body. Acting too tamely in the face of adverse primal obstacles means suffering passively, like stranded Menelaus first merely waiting for the sea to calm so he can sail home. 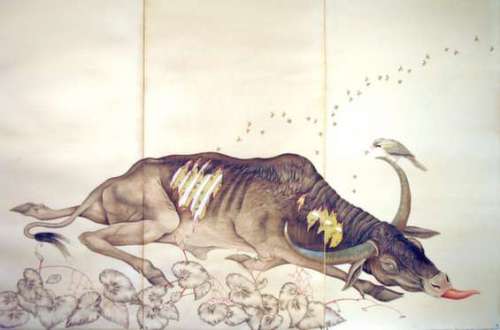 The sacrifice of bougonia makes a cruelly literal ritual of the figurative. Modern men would infer the theory of spontaneous generation, and analogy to flies swarming on rotting flesh. If it were rationalized, the hexagonal lining of the reticulum conjured bees by the principle of similarity to honeycomb. We work rather in the realms permissive of association here, casting out physical anchors as afterthoughts, and in myth, cast inner performances as named actors.

The hero seeks after rejuvenation. The seeker is conjuring primitive lifegiving out of himself once again, through forgiveness and reconciliation of the past. He honors and supplicates the deities of his unconscious with slaughter and immolation. He was the bull; he is the bees. He contains the advisor on his side; he contains the gods who were ill-disposed; he contains Proteus himself also.